You know, one of the most popular optical illusions I have ever posted on the site and Facebook page was the “Amazing Body Paint Optical Illusion.” I had so many people comment on what a beautiful optical illusion it was, so I was on the hunt for some more optical illusions that were very similar in nature and I finally found one that I think is worthy enough to be posted up on the main page of MoIllusions. This could be considered a scary optical illusion, but there’s not debating that it’s a beautiful effect and someone out there is very talented with body paint. Check out this amazing Zipper Skin optical illusion below and see what you think. 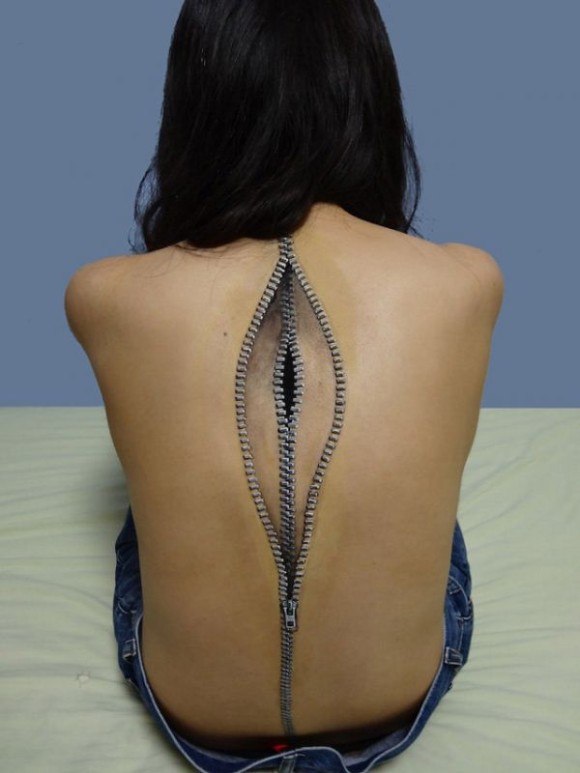 This body paint optical illusion makes it seem as if this woman’s skin is being zipped right off of her body. Whoever did this with body paint is a very creative person and they’re also an excellent artist. Without a doubt, this effect would be perfect for a Halloween costume. Did you enjoy this body paint optical illusion? Did it creep you out? Is it stupid? Leave a rating for this post and let me know how you feel. I would love to gather your feedback. I f you want to leave more in-depth feedback, you could also leave a comment below. Also, share this optical illusion with your friends and I guarantee that they will be amazed.

Good morning to all you, and welcome to Tuesday! Some of you are still recovering from the weekend, but in another day or two you will be just fine. This is the month of October, which is always a lot of fun because of the wonderful holiday called Halloween. Every year, there are tons of scary movies on, and people trying to find the perfect costume to wear. Today’s optical illusion is all about great Halloween costumes, and some of those costumes, can actually look pretty realistic.  The woman in today’s optical illusion has lost her head, and it looks so realistic, too! 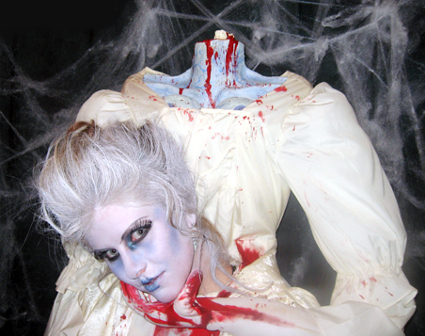 Ready for something else that is just as fun as a headless woman? Some people can look at any object and claim to see images in it like the sky on a cloudy day, or even a bowl of fruit! These images are made of many things like fruits, and books, and you can really see something in them! Whomever took the time, and had a lot of patience, in order to create these amazing men really had a lot of imagination and talent. What do you all think of these men made of fruit and books?  You never know where you can find an optical illusion, even in a bowl of fruit.